Kutaisi — Georgia is the former capital and one of the oldest cities in the world. According to the myth, it is in Kutaisi (in ancient times it was called AIA) arrived Argonauts for the Golden Fleece. The myth is not accidental. At the bottom of the Rioni River, which is located in the valley of Kutaisi, the locals laid sheepskins, water them pan out peschiki which then combed out of the skin. Such skin was named the Golden Fleece.

Our journey begins with the central square of Kutaisi, which can be called the «heart» of the city, since it is possible to get almost all the major ulitsamy, such yavlyayutsya: Shota Rustaveli Street, V alley to the street Zakaria Paliashvili street Zakaria Paliashvili Street, Queen Tamar Street Tsereteli street, Tbilisi and Gelati street. Going on a stone pavement can not take your eyes off of Colchis Fantan. 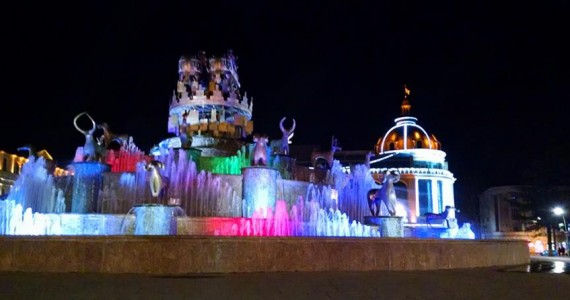 We can say that in the tradition of the central square immortalized by frequent changes of appearance. It all started with the arrival of the Bolsheviks. Until that time, the center was built in the name of Alexander Nevsky Cathedral in Georgia, it was called a «cathedral». The construction of this magnificent church lasted for 19 years. It began in 1852 with the participation of renowned artist Gregory Gagarin and ended in 1871. The cathedral was consecrated by Bishop Gabriel of Imereti Kikodze. On the territory of the cathedral were buried Kutaisi-Gaenatsky Metropolitan Anthony and Metropolitan Giorgadze Besarion Dadian. 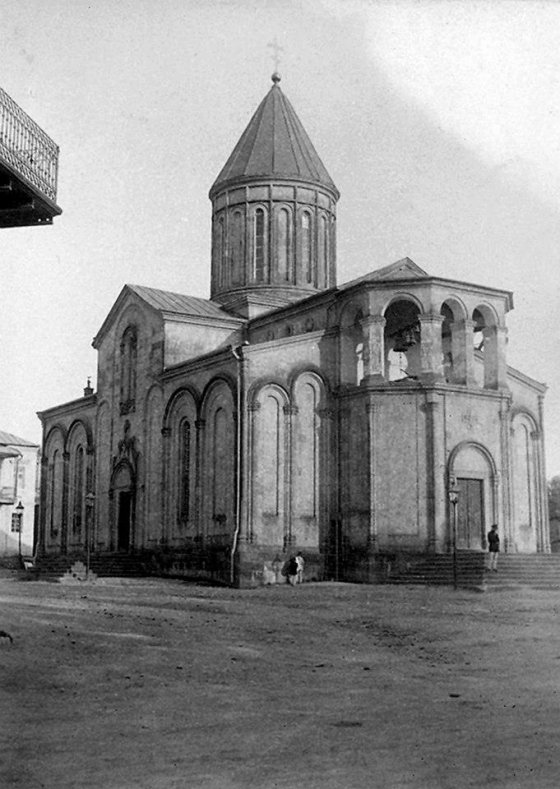 Unfortunately Alexander Nevsky Cathedral feast for the eyes of passers-by just half a century. 3 years after the occupation of Georgia, in 1924 by the decision of the Kutaisi presidium Bolshevik «Stalinist bandits» destroyed the cathedral. However, many of these vandals understood the tragic end. One of the activists during the destruction of the cathedral with the dome fell and died instantly. Also at the cathedral were buried Georgian cadets, who died in the battles for Tbilisi in February 1921. During the destruction of their graves were destroyed. 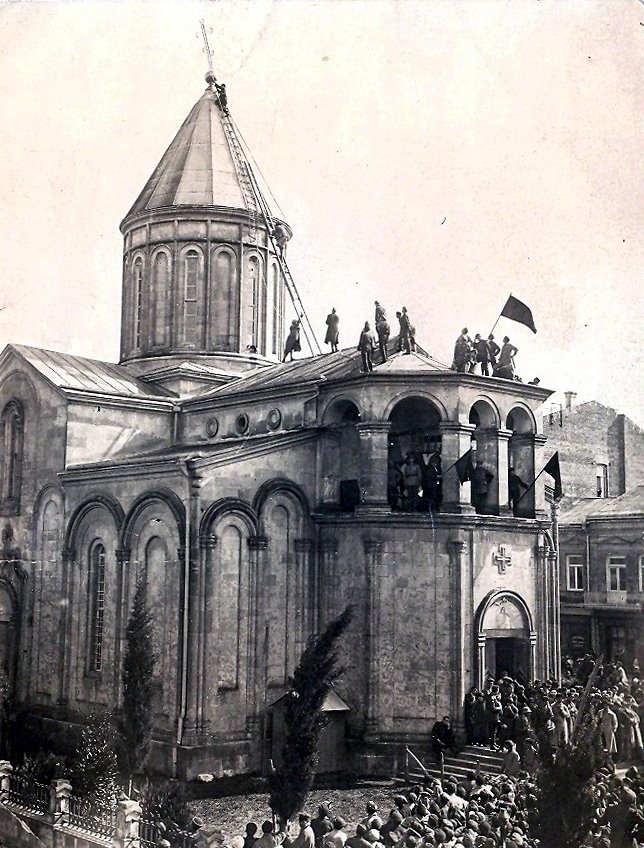 Soon the Bolsheviks changed the architectural structure of the central square. Here erected a statue of Lenin, designed by renowned sculptor Iakob Nikoladze. After a while it was replaced by a statue of Stalin. In the post-communist period, the city management has decided to make a flower in the center square. Unfortunately, the flowers were not in bloom (the Jews said: «There has not bloomed, Stalin, and the flowers, and even more so»). After the flower park is placed the statue of David the Builder. 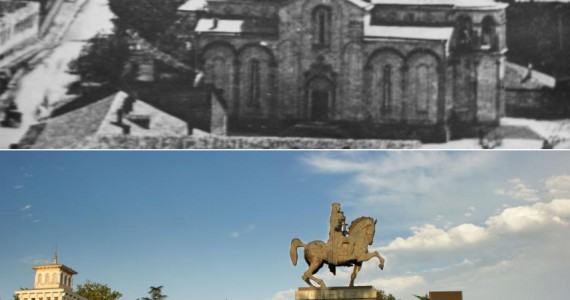 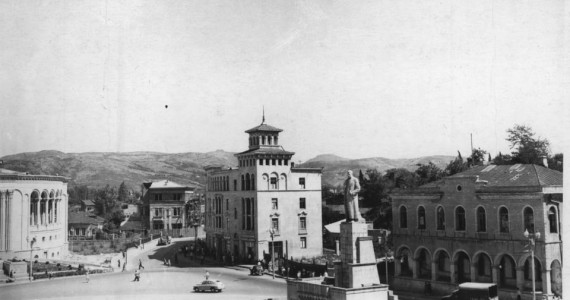 Now wishing to try their luck come into the valley of Rioni in the hope of finding gold.
Kutaisi rises above sea level at 125-300 meters. In January, it’s cold all, from +5 to 0 degrees. But in August, it is possible to get warm, the air temperature ranges from +30 to +32 degrees. 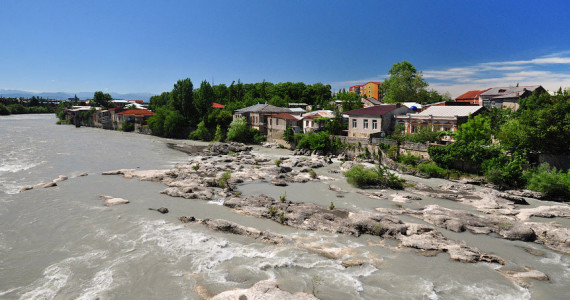 One of the main shrines of Kutaisi is Gelati Monastery, which was built in 1106 by order of King David, called David the Builder. 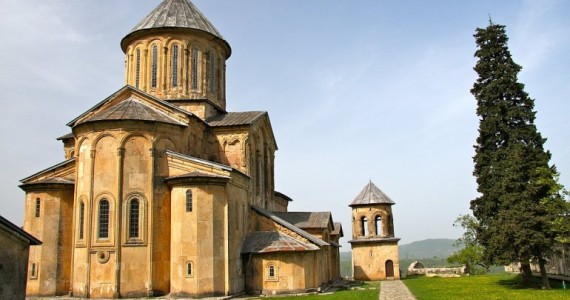 The monastery was set up for the tomb of the royal family and the King David the Builder himself be buried under the gate of the temple, so that all who come to the monastery, stepping on the grave of the king. It was David’s repentance for his pride.

Another attraction — Monastery Motsameta. The land of martyrs. 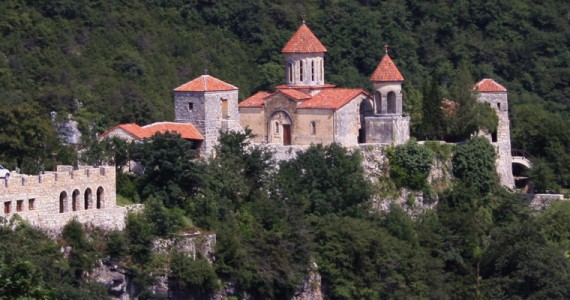 It was built in honor of St. David and Constantine Mkheidze. Nobles David and Constantine began an uprising against the Arabs to conquer Georgia in the 8th century. The revolt failed, and the brothers seized the promised freedom in exchange for their acceptance of Islam. But the brothers did not renounce Christianity and for that they died under torture, and their bodies were thrown from a cliff into the river. River red with their blood. Since then, she Tskaltsitela called «red water».
Nobles Mkheidze David and Constantine erected in the face of the saints, and the place of their death built a monastery, where the rest of their power.

One of the places of interest Kutaisi — Temple Bagrat, which is located on a hill Ukimerioni. It can be seen from anywhere in the city. The temple was built by King Bagrat III in honor of the Assumption of the Blessed Bogaroditsy. In 1691 it was destroyed by the Turkish conquerors. In 2011-2012 the church was restored, the central church of the Assumption of the city of Kutaisi Blagoroditsy. Since 1994, the temple is under the protection of UNESCO. 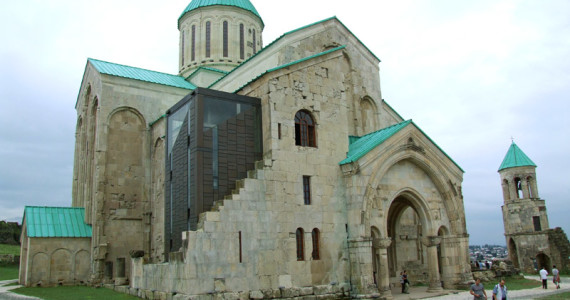 7 km north-west of Kutaisi is Reserve Sataplia, surrounded by 500 hectares of unique forest. The reserve area 354 hectares. and it is located at an altitude of 500 meters above sea level. In 1925 there was discovered karst cave, opened it, Peter Chabukiani. In the hall there is a huge cave stalagmite, which has the shape of the heart. The height of the hall is 10 meters, width 12 meters, length 600 meters. The reserve was created in 1935. here you can see fossilized footprints of dinosaurs and there are nests of wild bees. That’s why this place is called Sataplia. Georgian «tapli» honey. The temperature of air and water in the karst cave Sataplia 12-13˚S. Near the nature reserve are speleological museum. 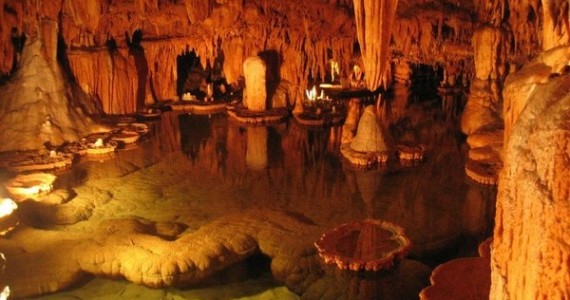 Not far from Kutaisi, near the spa resort Tskhaltubo is famous Cave Prometheus . 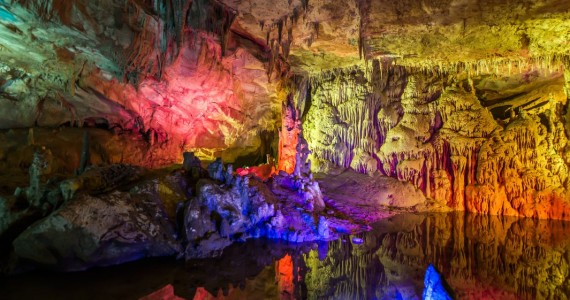 Named it in honor of the mythical hero Prometheus, who was chained to a rock gods in the Caucasus. The cave is very large, it is open to visit 17 halls with growing stalactites and stalagmites. Some of them look like flowers, others — on the boom, which seems about to fly away into the abyss of the underground lake. The cave flowing underground rivers, one of them can swim on the boat finished the tour. Even more mystery attached to cave bats, flying away in fright from the worry of tourists.
When you exit the cave you will meet a sculpture of a man with a dog. Rumor has it that a local man on his own initiative for many years guarding the cave from vandals.

If you need to find a hotel or guesthouse in Kutaisi, go to the link — Hotels in Kutaisi