Tbilisi — the capital of Georgia, a big city with lots of attractions and its legends. One of them says that Tbilisi was built in memory of a loved Falcon King Vakhtang Gorgasali. During the royal falconry bird of prey he rushed the wounded duck, who wanted to hide in the waters of the lake, but it turned out that the water was so hot that both birds cooked.
Who is this hot sulfur springs area is Abanotubani , which built sulfur baths . They can quickly restore power spent on sightseeing tours. Here you can see almost located at ground level of the dome — a roof bath houses, baths themselves are below ground level. 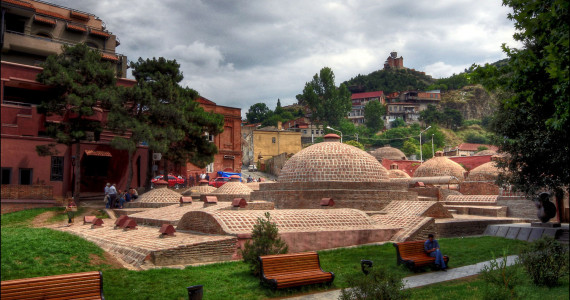 One of the main attractions of Tbilisi considered Narikala fortress. This defensive fortress, which is built on Mount Mtatsminda. The mountain is named in honor of the Apostle David Gareji, who lived in her cave as a hermit.
In 1827 there was a strong earthquake, which destroyed the walls of the fortress. In the 21st century we have been made to strengthen the operation and restoration of the fortress. 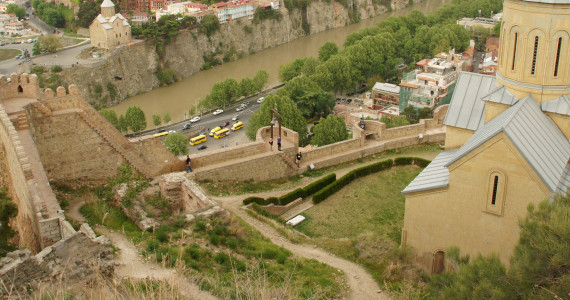 Here, on Mount Mtatsminda, spread Mtatsminda amusement park. From the foot of the mountain to its summit, the park will take you to the funicular, which is a two trailer traveling towards each other. In the middle is provided for the interchange junction trailers. Himself funicular is part of the fun, and the park has many different attractions for children, a great number of fountains, you can take a ride on the Ferris wheel, see David cave where he lived as a hermit, taste Georgian dishes in the restaurant with a viewing platform. 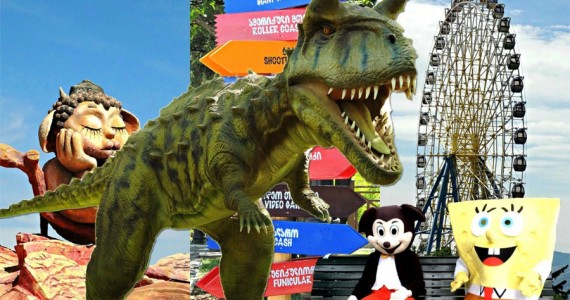 Holy Trinity Cathedral of Tbilisi (Georgian. წმინდა სამება — «Holy Trinity») — Cathedral of the Holy Trinity — the main cathedral of the Georgian Orthodox Church. Located on Mount St. Elias. The 13 council seats, the lower church of the Annunciation. The belfry is built separately.
The construction of the new cathedral was planned in 1989 on the occasion of the 1500th anniversary of the autocephaly of the Georgian Church and to celebrate the 2000th anniversary of Christianity.
The height of the upper church is 68 m (without nadkupolnogo cross, cross 7.5 m). Total area — more than 5 thousand square meters.
The temple was founded November 23, 1995; construction was carried out on the donations of ordinary citizens and prominent businessmen. The first service in a newly built cathedral was made December 25, 2002. Consecrated exactly 9 years after the laying of the day George.
After the consecration of the Cathedral of the Trinity from Zion was postponed Department Catholicos of Georgia. 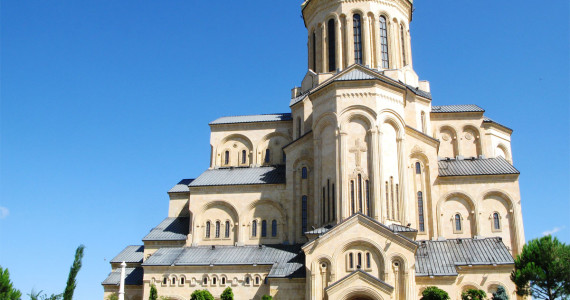 St Nshan (Holy Sign Church) is located in the Old Town on Silver Street.
The church was built at the beginning of the XVIII century., And the dome in 1780.
Porch, adjoining the north wall dates from the 1720 year. The church was severely damaged during the invasion of Agha Mohammad Khan in 1795. In 1820 Surb Nshan restored famous Armenian philanthropist Avetik Pitoyanom.
Surb Nshan has three altars. Middle is dedicated to St. Nicholas, the side — St. Andrew and St. George.
In Soviet times there was located a warehouse for pasta. Later — archive of Armenian-language editions of the National Library. The church is also used as a book depository.
In 2002, a fire broke out in the church. As a result, it struck one of the columns inside the church. In 2012, there was another fire. During the second fire portico collapsed remnants of murals. 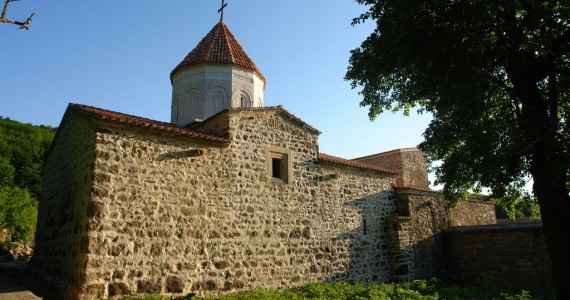 Ethnographic Open-Air Museum is located near Turtle Lake.
Ethnographic Open Air Museum was founded April 27, 1966 the famous ethnographer George Reading. It is located in Vake district, to the west of «Turtle Lake» (consignment. კუს ტბა — Kus TBA).
The museum is divided into 14 ethnographic zones: Kartli, Samegrelo, Adjara, Abkhazia, Svaneti, Khevsureti, Kakheti, Meskheti, Javakheti, Guria, Imereti, Racha, Lechkhumi and Ossetia.
You can get to the museum on the city buses that pass through the «Bagebi» — a suburb of Vake, on Rustaveli Avenue and opposite the bus stop begins the ascent by foot to the lake — it’s 1.5 km (20-30 minutes). Or take a taxi to the museum itself. 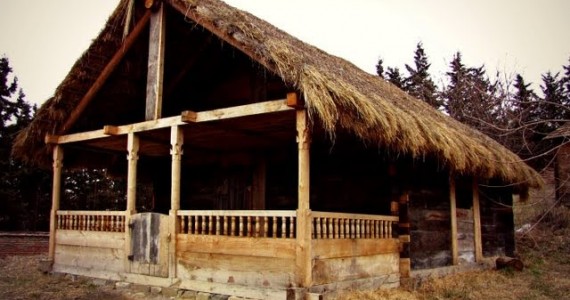 Puppet Theatre Gabriadze
The theater is located in the historic center of Tbilisi (Old Town), on the street Shavteli near Anchiskhati Basilica, the oldest of the surviving churches in the city.
Marionette Theater Gabriadze founded over 30 years ago. One of the main attractions of the architectural ensemble of the theater was the clock tower, built in 2010.
Twice a day, at 12 and 19 hours, you can see a puppet show — «Circle of Life.» Every hour of painted door appears an angel and a hammer hits the bell.
In a small auditorium with 80 seats.
At the bottom of the tower — two ceramic panels. On the roof of the pomegranate tree is growing.
To the right of the tower — the entrance to the theater cafe «Gabriadze.» In the summer months when it offers a cozy terrace. 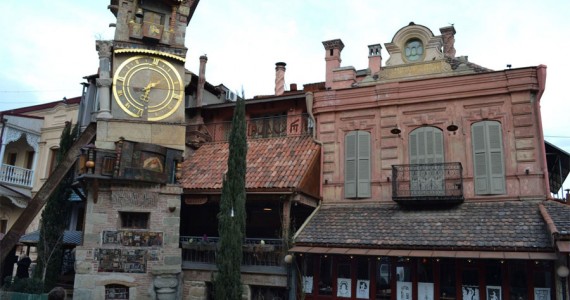 Bridge of Peace (load. მშვიდობის ხიდი) — a pedestrian bridge in Tbilisi, between Baratashvili bridge and Metekhi. Bridge unites Irakli II street in the old town and the park Rica.
The bridge was built at the initiative of Mikheil Saakashvili and officially opened on 6 May 2010. The architect of the bridge is an Italian Michele De Lucchi (Michele De Lucchi). Lighting designer was Frenchman Philippe Martineau (Philippe Martinaud).
The bridge consists of a 156-meter steel frame covered with glass. The entire structure rests on 4 powerful support. You can get to the bridge from both sides of the street, and Irakli II Park Rica, and the waterfront boulevards. 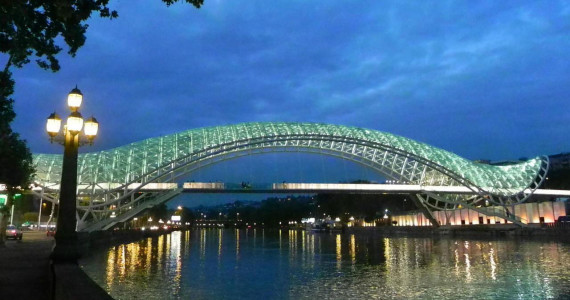 Gardenia Shevardnadze — it is a combination of beautiful gardens, flower shop and a cozy cafe. The author of this creation, Zurab Shevardnadze gave a second life to old things and old, making them in flower pots, flower beds, decorations in the summer cafe. They come here all the wedding procession to the photo shoot, here spend the evening almost all the residents of Tbilisi. Take a look here and you. 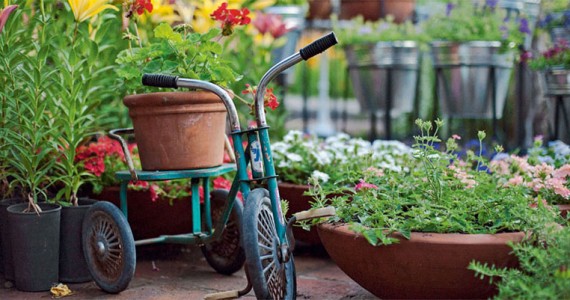