Different people have their own traditions, different from the others. Georgia among them is old and unique custom, which heard almost the whole world. They were created and changed over the centuries. What is most interesting, Georgian tradition came to the current generation while preserving the values ​​of life of their ancestors and were distributed in different regions of Georgia.

In Georgia, there are many different traditions, but the most important are a few: a tradition of hospitality, weddings, feasts, the cult of the vine, the celebration of various events that are part of the life of modern Georgian population.
The tradition of hospitality common in many countries, but in Georgia it is as old as its people. It’s a defining feature of the Georgian family. Since ancient times was considered a guest of a gift from God, which the owner is willing to protect even at the cost of life. On this tradition, many works written since the hospitality is very closely connected with the history of Georgia and its modern inhabitants.

Another important tradition is the custom of caring for vines. Immeasurable love Georgian 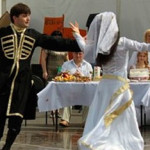 people to grapes and wine for centuries displayed in art, mostly of Georgian traditional ornaments and frescoes that adorn the old church building. At the insistence of the ancient Georgian wine was even considered a holiday that performed songs and dances. Even in the 10-11 centuries. in the famous Gelati Academy owned infusion of wine in different ways, as evidenced by recent archaeological excavations.
In the mountainous regions of Georgia is very common tradition of brewing and drinking beer homemade various celebrations.

Another of the many traditions of the Georgian — «Mekvleoba.» For centuries it has been a symbol of prosperity, happiness and kindness of the family. In Georgian means «tracklayer.» «Mekvle» — the first guest in the coming year. Before voiti the house, «mekvle» should say: «I come and bring you joy, happiness, health, goodness and well-being.» If the year the family went well, so guests went with a pure soul and intentions.